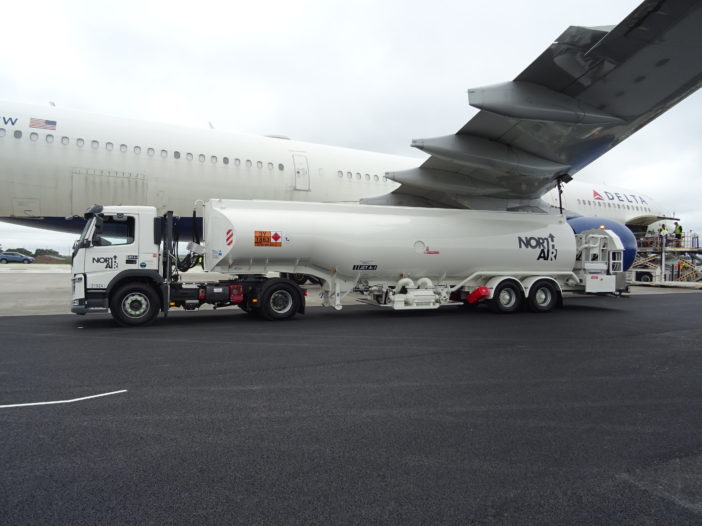 In June 2021 North Air were privileged to support the G7 Summit in Newquay working with Anthony Kinns Aviation Ltd. Kate Abdey, our supervisor at East Midlands airport, who formed part of the six strong team seconded to the project, gave us a summary of their time on site.

“Half of the team arrived on the evening of Sunday 6 June into Cornwall and were hopeful that the sunny weather would remain for the rest of the week. On arrival at the fuel farm on Monday morning we were able to meet the Newquay Airport team (Mark, Terry, Alex and Scott) and visualise and discuss where our vehicles would be placed. Due to limited space, not all of the North Air vehicles could be placed in the fuel farm, so we were granted permission to park on the apron just the other side of the fence line so that we were still able to see the vehicles, and most importantly, that they were safe and secure.

As we arrived, we noticed that there was a US Air Force fuelling bowser being loaded and we realised the privilege of refuelling Air Force One was unlikely to be our responsibility. However, we were lucky enough to fuel some of the aircraft transporting other world leaders as well as aircraft not usually fuelled by North Air.

Having been informed that our vehicles had begun to arrive, Alfie and the team started to prepare them for use as well as confirming the delivery schedule with CMG Transportation for when the remaining North Air vehicles and rig steps would arrive. On the Monday night, the rest of the team arrived from Bristol and Cardiff and the team was complete. It was good to interact with colleagues from other sites and it was clear to see that everyone was excited about the upcoming days and keen to show what North Air could offer.

The following days consisted of preparing the vehicles and steps, as well as getting to know the areas everyone would be driving in and integrating ourselves with the Newquay team. We were asked to take COVID lateral flow tests daily to ensure the health and safety of everyone on site and the additional security because of the summit meant that we would be escorted during our refuelling tasks due to us having to manoeuvre over taxiways and the runway to various stands.

Aircraft started to arrive and North Air got into full swing along with the Newquay team. There was plenty of different aircraft coming in and this gave us the perfect chance to do our bit and show our professionalism. The team showed great flexibility in their approach to work, sometimes doing split shifts, due to the nature of the event and the adaptable aircraft arrival and departure schedule. Feedback from the airlines was that they were impressed with our vehicles and how we operated.

On Sunday, aircraft were getting ready to leave and many required further uplifts. This gave the Newquay/North Air team a busy day to ensure that all customers received the additional fuel they required and were able to leave the airport on time for their onward journeys. It also enabled the team the perfect opportunity to start emptying their vehicles in preparation for collection the following day and return to their respective sites.

The Newquay refuelling team looked after us very well, as did the airport with their hospitality, although we were sure they were also glad to get back to their normal operations! It was a good experience for both sides and is always beneficial to be part of such high-profile events and do things away from the normal routine of work. I was extremely proud of how the team worked together and they were a true credit to themselves as well as North Air.”

North Air would like to thank everyone involved in this project and special thanks go to the Newquay Airport team, CMG Transportation, Anthony Kinns Aviation and our own team led by Kate Abdey, EMA Supervisor. We are pleased to share below some testimonials from the team members.

Tom Wantling – Cardiff
“Over the last week, representing North Air at the G7 summit has been an honour and a pleasure. I have seen and done things that I have not experienced before and have worked with some great people in that time. Everyone I have worked with has been accommodating and professional.”

Alistair Ball – Bristol
“It was a once in a lifetime opportunity to be offered the experience and I am grateful to have been part of a great team to refuel the heads of state.”

Jason Grant – Bristol
“The G7 summit at Newquay has been a great experience dealing with different types of aircraft and demands not normally seen at North Air sites.”

Steve Lowes – East Midlands
“It was a great opportunity to see how another fuel farm operates and to work with new faces. It was an interesting experience and I was pleased to be part of it.”

Alfie Beaumont – Maintenance Team
“I didn’t know what to expect when I was asked to support the team. It would be easier at one of our own sites, but when working from a third party site it can be tricky. We knew it would be challenging managing stock levels due to the small capacity on the fuel farm. I enjoyed spending time with the North Air team and also with the Newquay team, who had their world turned upside down with us being there. Hopefully, we can offer them a maintenance contract in the future. My only regret was taking advantage of the free pasties that Newquay Airport laid on during the summit!”

Kate Abdey – East Midlands
“This was a great opportunity for us to see how other fuel farms operate and to become part of another team. I want to thank the team at Newquay for their hospitality and North Air for the great team they sent for this event. Being able to be part of events like this is definitely beneficial and I hope that more opportunities can arise for other North Air personnel in the future.”